A new Backbone for Africa

A Unique Investment Opportunity for the growing economies of Benin, Niger & its neighbors, presented by the Petrolin Group. 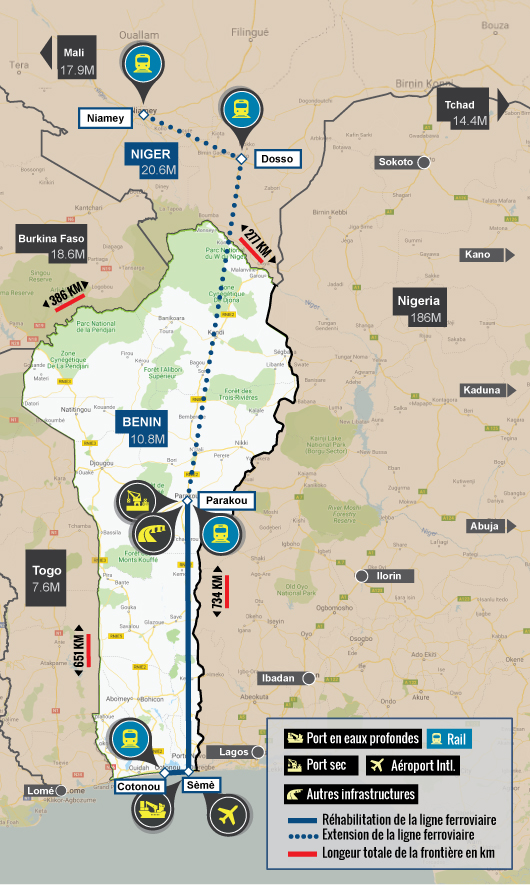 The Backbone Project is a large-scale infrastructure development program in Benin, conceived by the promotor Petrolin Group in order to ensure the economic development for the neighbouring countries.

The Backbone Project is integrated by many components namely Railway (won by an international bid round), Dry ports, Deep-water port, Airport as well as other auxiliary and ancillary infrastructures.

The railway entail the rehabilitation of the existing section between Cotonou and Parakou in Benin and the construction of an international standard gauge line linking Parakou to Niamey through Dosso in Niger for the transport of goods and people to neighbouring countries and to landlocked regions.

The dry port of Parakou is a multi-modal platform located at 3 km away from the centre city of Parakou and it is close to the railway. It gives the Backbone Project a strategic position for imports and exports to neighbouring countries, notably Burkina Faso, Mali, Niger, Nigeria and Togo.

The deep water port of Sèmè-Podji is an Oil, Mineral and Commercial deep water port, will be built on a land area declared as public utility covering 1006 hectares. Its main activities will be the flow of goods: container traffic, import & export of bulk and general loads, etc.

The new airport in Benin will become an international platform and a Pan-African hub. This new airport is ideally positioned near the southern Benin-Nigeria border with the aim of serve southern Nigeria and Benin passenger and freight markets.

Firms involved in the project

The engineering firms, consultants and financial institutions who have contributed to the work on the strategic, technical, economic, financial, fiscal and legal aspects of the Backbone Project.

The commissioning of the Dry Port of Parakou, which is connected to the national rail and road networks, will decongest the Port of Cotonou and will improve the logistic supply of the Beninese corridor.

The Dry Port of Parakou is an essential component of the Backbone Project, an integrated logistic corridor program offering effective and competitive imports) and exports solutions to neighbouring countries such as Benin, Niger, Burkina Faso, Mali and Nigeria.

Following this announcement, Petrolin Group Founding Chairman, Mr Samuel Dossou-Aworet, stated: The signature of the Inter-Ministerial Order is a sign of confidence which reflects the continuous strengthening of the public-private partnership between the Government of Benin and Petrolin since 2010 in the implementation of the Backbone Project. The commissioning of the Dry Port of Parakou, will contribute to the growth of Benin's economy and those of the sub-region's landlocked countries and territories.

In its Issue No. 3028 of 20-26 January 2019, the newspaper Jeune Afrique stated: «In March 2018, following harsh negotiations between the Authorities of Benin and Niger, Samuel Dossou has, however, agreed to transfer the Project to China Railway Construction Corporation Limited (CRCCL) against the pledge that he will be granted the construction of the deep-water port of Sèmè-Podji, located between Cotonou and Porto-Novo».

That piece of information published by Jeune Afrique is completely inaccurate. Petrolin Group has neither negotiated, nor agreed to transfer its rights over the Cotonou-Niamey Railway Corridor in consideration for any «pledge» whatsoever on the port of Sèmè-Podji, and formally denies those allegations.

If, as published in the magazine Challenge on 19 March 2018, Benin's Head of State, President Patrice TALON « stated to have already secured «the agreement in principle» of the Chinese authorities to examine the feasibility of the railway project, and they have reportedly established the cost of the section going from Cotonou up to Niger Border, or 740 Kilometers at 4 Billion Dollars», to the best of its knowledge, Petrolin Group has not been aware of any such agreement in principle in this respect.

It should be recalled that the open International Invitation to Tender No. 5498 launched by the States of Benin and Niger, co-owners of the Cotonou-Parakou- Dosso-Niamey railway line, had in 2010 selected Petrolin Group as the successful bidder of the corridor, a situation which was definitely clarified in September 2017 by the Decision of the Supreme Court of the Republic of Benin that restored the rights of Petrolin Group following a partner illegal expropriation attempt.

The newspaper Jeune Afrique could have mentioned the quality of the works undertaken by Petrolin Group as regards the construction of the dry port of Parakou with its connections to the national road and railway network that conform to the standard sought after in today's Africa unlike the «143 km of rails [...] laid by Bolloré Africa Logistics » in Niger which Jeune Afrique refers to in the Article.

The deep-water oil, mineral and commercial port at Sèmè - Podji was granted to Petrolin and its infrastructure subsidiary, notably PIC Network Limited, in January 2010 through the Public-Private Partnership and investment Framework Convention between the Republic o f Benin and PIC Network Limited, and approved by Decree (2010-212 of 25 January 2010). The Convention was strengthened in 2011 by the Spécial Agreement relating to the construction o f the oii, minerai and commercial port at Sèmè-Podji signed between the Republic o f Benin, PIC Network Limited and PIC International SA, the Beninese subsidiary and Concessionaire of the port, approved by Decree (N° 2011-794 of 9 December 2011). The on-going discussions with Benin's authorities relate to the compensation of land rights holders that Petrolin Group has agreed to pre-finance in lieu o f the State of Benin, and the effective provision by the latter of a land surface of 1006 hectare to enable Petrolin Group to start constructing the port. In December 2016, Petrolin Group was issued the environmental and social compliance certificate that meets international criteria.

Unlike what Jeune Afrique states, there is no pledge in return for anything whatsoever between the rails and the planned deep-water port.

In order to understand the Backbone Project one should remember that it is a large-scale interdependent port, dry port, airport, rail and highway infrastructure project governed by a Public-Private Partnership and Investment Framework Convention with the Republic of Benin. It is a regional integration project between Benin, the countries of the hinterland (Burkina Faso, Mali, Niger), and Northern Nigeria conceived, launched and promoted by Petrolin Group with robust legal contractual bases as well as a large number of achievements on the ground.

New Facilities for the Dry Port of Parakou

The Dry Port of Parakou, located in central Benin, is home to a new facility, a 6,400 m2 hangar with a storage capacity of 48,000 m3. The facility is equipped with surveillance cameras, fire hydrants, day and night lighting system and Internet network, to name only a few. It was designed to guarantee clear traffic and optimum use of space. A 25 m watchtower above the floor and light poles, allowing for night shifts, complement this one-of-a-kind facility in the region.
The Dry Port of Parakou, which forms an integral part of the Backbone Project, is a bonded Infrastructure with direct commercial and logistical connection by rail and by road to the Port Authority of Cotonou, Benin, and the countries of the hinterland; an infrastructure equipped with other facilities designed to accommodate - whilst optimizing transportation times- goods transferred directly, or bound for ships, without formalities at the seaport.
The Backbone Project is a large-scale integrated transportation infrastructure program (port, dry port, airport, rail and highway) initiated, designed and developed by Petrolin Group. It is composed of five components critical to the development of countries in West Africa, notably Benin, Niger and Nigeria. For Petrolin Group, geostrategic issues in the sub-region justify its resorting to Public-Private-Partnership [PPP] to reach the various stages for Project implementation.
Petrolin and its infrastructure affiliate, PIC Network Limited, have obtained from the Governmental Authorities in Benin solid contractual bases, notably:

The rights and guarantees given by the State under the Framework Agreement benefit the Promoter, the engineering and development firms, Partners, Operating Companies, and their affiliated companies, all Participating Financial Institutions and all Subcontractors.
The Backbone Project’s benefits throughout the country of Benin from the ”E Regime” of the National Investment Code (applicable to structuring investments).
In addition, Petrolin is winner of the international tender sponsored by the Governments of Benin and Niger to operate, as Concessionaire, the Cotonou-Parakou-Dosso-Niamey rail network (Tender N°5498/MDCTTP-PR/MTAC/DC/SG/OCBN dated 4th August 2008).
The contractual bases of the Backbone Project also include:

For realisation of the different components Petrolin Group has retained the services of technical, financial and legal experts of first order which, notably, include Herbert Smith, Axelcium, Coteba (Artelia), Technip, SNCF International, Rites (affiliate of Indian Railways), the Port of Havre, R+R Burger and Partner, Royal Haskoning, Roche (Norda Stelo), Hill International, as well as contributions from experts based in the sub-region, notably Afrique Omnitech, BEST and Benin Expertise.
To arm the Backbone Project with an independent point of view concerning the work done by the experts, Petrolin Group retained the services of a third party expert, Ernst & Young Global Infrastructure Advisory Group based in France and in Switzerland.
Petrolin Group commits to remain active in all phases of the Backbone Project and to respect standards of Good Governance in the establishment of a profitable Partnership for all concerned parties.